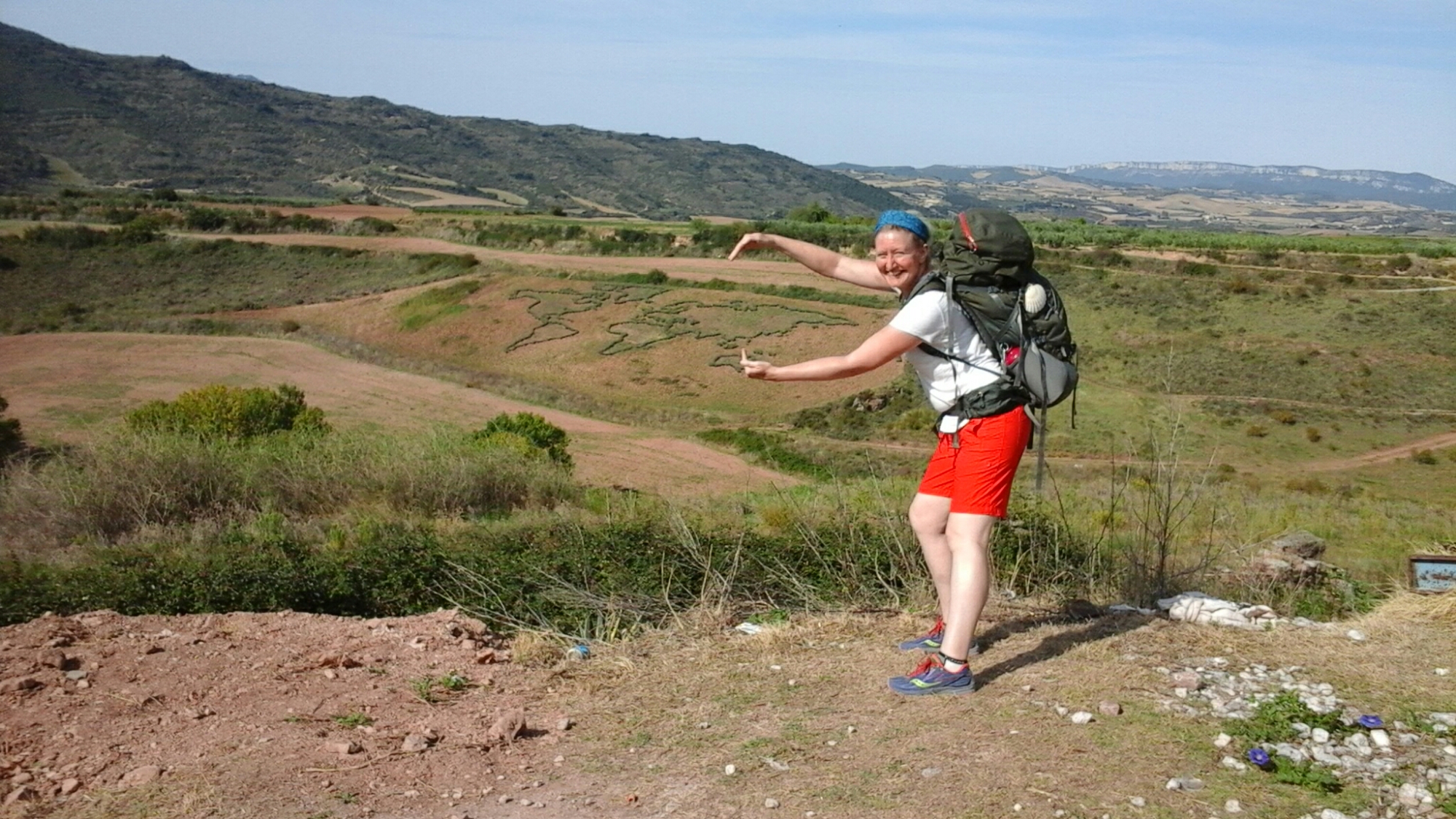 You know there are some days when I just don’t feel like walking. When my alarm clock goes off I would prefer to roll over and snuggle down in my sleeping bag and go back to sleep, especially when it is still dark and even more so when I have been struggling to throw off a nasty head cold. For the last few days, my ‘Camino cold’ has taken over my body and I have felt rotten. I kept telling myself that I must have become really run down in the last few months, while caring for my mum. Stress can do that. Laurie, one of my new Camino friends, who I have been enjoying sharing the joys and sorrows with, gently suggested that actually the Camino was helping me to cleanse and detox my body. It was just having a jolly good old clear out! I think this is true, I can feel my body decongesting as well as going through various physical changes that walking the Camino day after day can bring. I reminded myself that I am walking the equivalent of a half marathon or more every day with a heavy weight on my back! That is something I do not normally do at home.

Now for the nerdy bit…let’s get the OCD daily km tally over with shall we? Yesterday, I reached Puente La Reina, a cumulative distance of approximately 92 km (57 miles). This means I have yet to walk 684.5 km (425.3 miles) to Santiago de Compostella…and it feels like a long, long way from here! Today’s leg, according to the Camino guide book, would be a 22 km stretch winding through Maneru, Cirauqui, Lorca, Villatuerta to Estella. However, my body felt tired so I wasn’t convinced I would make it all the way to Estella…but we’ll see how the day and the pathway pans out.

Laurie and I left Puente la Reina quite early after a disappointing breakfast at the Hotel Jakue (a piece of very hard and dry toast with butter and jam). On this morning we were not allowed to go into the restaurant and instead hotel staff reluctantly served pilgrims in the bar. We ambled down through the centre of town and crossed over the Queen’s bridge following the undulating Camino trail towards Maneru. Apparently this village had links to the Knights Templar and the Order of St. John so I was keen to see what the church was like inside but it was closed. However, the bar opposite wasn’t and my stomach told me it was time for a second breakfast. La Union de Maneru does a great ham and egg breakfast boccadillo, served up by a matador. He was not wearing a full matador costume (that would have been bizarre) but the photos on the wall gave the game away.

You are probably thinking that I talk about food a lot in this blog and you might be wondering why that is. Well, since I started walking the Camino, I am burning off shed loads of calories (and about time too as I was out of shape back in my old London life). As a result I feel as though an alien is occupying my stomach, an alien bigger and meaner than the one that burst out of Sigourney Weaver in the film. This alien is determined to remind me how hungry I am at every opportunity… and if I don’t feed it, then I will be in trouble!

We left Maneru sated and enjoyed strolling along in the sunshine to Cirauqui. Whichever way you approach Cirauqui, a picturesque little town, you know you are going to have to climb uphill because the Camino snakes round past the church, which stands grandly on the hilltop. Going up and over and down the other side, I could have easily missed the map of the world, planted in a neighbouring field on the left hand side. I could just about make out the map from the trail. It seemed a bit random to me. I mean why is a ‘living’ map of the world in the middle of a field? This puzzle served to remind me of two things – the first is that during the last twenty years of my humanitarian career, I have had the privilege of living or working in over twenty countries, where I have enjoyed meeting all sorts of people and learning about the history, culture and language. The second, is that the Camino de Santiago brings together people from all over the world to mix, mingle, share their life experiences, share food at table and journey together. I began to hum to myself “she’s got the whole world inher hands, she’s got the whole world in her hands, she’s got the whole world in her hands she’s go the whole world in her hands”.

Naturally I thought of the Camino as a ‘she’ and not a ‘he’ for some reason, even though it takes the masculine form of ‘el’ in Spanish. This thinking led me on to reflect on masculine and feminine energies. Isn’t it wonderful how walking frees the mind to take flight and soar and dive from one topic to another? I have observed how the Camino de Santiago can be a catalyst for integrating masculine and female energies. The masculine energy helps to maintain the drive, the ‘get up and go’ to roll out of bed in the morning, pack up and blaze a trail. It also helps to keep focus on the way forward and achieve a goal, such as reaching a particular destination by the end of the day. The female energy assists with nurturing the body, mind and spirit, looking out for the needs of others, engaging in community and following intuition. For me as a female, the latter comes easily. Now, I am learning to integrate more of the masculine energy, which is interesting and exciting. However, I am also mindful to listen to my body so as to not drive too hard. My knee reminded me it was not a happy bunny today!

The Camino trail led Laurie and I down and up and down the remains of a Roman road and I couldn’t help but recite a short snippet from Monty Python’s ‘The Life of Brian’, you know the sketch “what have the Romans ever given us?”, and a member of the Peoples Front of Judea pipes up “Well they have given us roads…etc”. My knee replied, “that’s all very well giving us roads but the roads are for chariots, these cobbles are a right pain in the a**e!”

A few more painful strides and knee grumbles later, we pressed on through the pretty town of Lorca and headed for Villatuerta. The sun was scorching down at this point and I could feel every step. We decided to end our day’s journey here and spotted some adverts for the Casa Magica, the Magic House, which claimed to have no bunk beds. I got excited by that point. A few metres along I began to see why the Casa Magica could claim to have no bunk beds. It was a clever marketing ploy because in the next photo the mattresses were on the floor!! How we laughed. Anyway the name had a good vibe about it. I was ready for some magic. The gamble paid off. When we arrived and walked through the doorway, we entered a cool, pebble cobbled hallway in a very old house. Perhaps I had walked into Hogwarts or a portion of Diagon Alley had somehow teleported its way to this corner of Spain! The magic house was fascinating, quirky rooms (small dorms) on different levels, an outside covered mezzanine terrace with hammocks, laundry facilities, a vegetarian menu and massage therapist on site!

Yep, you can guess what happened next. After the ritualistic showering and handwashing of laundry, it was time for the pilgrim meal, kicked off with a peculiar Russian salad (we all thought it was slightly dodgy, but were not convinced Putin was involved). A plate of rather phallic looking white asparagus followed (delicious by the way) and then a lovely veggie paella. Dessert, and yes I have to have dessert as it is vital for my wellbeing, I enjoyed a bowl of the best creme brullee-type custard I have ever tasted. Magic indeed…and so to bed.

One thought on “She’s got the whole world in her hands.”