Ok folks, its time for another nerdy fact alert. Yesterday, I reached Fromista, after a lovely 25 km trek from Castrojeriz. This means that I am now approximately 424.4 km or 263.7 miles away from Santiago de Compostela, having clocked up about 351.8 km or 218.6 miles on my two pins or Shank’s pony (as my Dad used to say, or the number 11 bus as Brett likes to say!).  I’m feeling fitter and stronger than I have ever felt before and I must confess, I have really surprised myself that I have been able to walk this far. This might sound strange to some because walking is a perfectly natural process, like breathing, but when I set off from St. Jean Pied de Port three weeks ago, I was both excited and a tad fearful. Excited about fulfilling my long-standing dream to make this pilgrimage, but fearful that I wouldn’t be able to hack the distance, especially while carrying a load on my back (physically and figuratively).

I deduce that two of the main lessons I am learning more and more on the Camino is to let go of my own self-limiting beliefs and to trust in putting one foot in front of the other. How many times have I raced ahead in my own mind, worrying about reaching a goal and an outcome, whilst fretting about all the things that could happen along the way?  Usually, I am so preoccupied with an ‘end-point’ that I do not let the journey towards that goal and outcome unfold naturally. Now,  my new understanding of my reality is that all I have to do on a daily basis is to show up and put one foot in front of the other towards my goal and I can take this principle back home with me. I suppose it is similar to mindfulness as the Camino helps me to focus on the present moment.

So, today’s goal was to reach a very strange-sounding place called Carrion de los Condes. I hoped that didn’t mean the decaying flesh of dead ‘Condes’, whoever they were. The name failed to conjure up a picture of a welcoming community to me. Anyway the walk was about a 20 km stroll through reasonably flat countryside so I thought it would be simple-pimple!

The chill morning air gave me goose bumps as I left Hostal Camino de Santiago. The early morning light bathed the streets of Fromista in a blue glow. I went in search of breakfast and stopped in a bar that was open for my usual ‘desayuno’ and watched the world go by for a few moments, while I sipped my coffee. I spoke to a young French chap outside, who I had seen on the trail the day before. He told me he was walking with his father but his father wasn’t feeling well that day and would go on ahead by public transport and wait for him in Carrion. I said I hoped his father would feel better soon and wished him “Buen Camino” as I picked up my trekking poles and click-clacked down the street to the crossroads, where I picked up the Camino trail once more.

I trundled on following  a thin, straggly line of pilgrims. Fromista was an odd looking small town, which reminded me a little of a wild-west staging post. Perhaps my imagination was running way with me. I reflected on my conversation with the French pilgrim and thought how lovely it would have been for me to walk the Camino with my mum when she was alive. I felt a bit emotional at that point and remembered the moments I experienced with mum on the Camino so far, recognising that she accompanied me in the spiritual realm. I felt comforted by this thought and immediately discovered a bounce to my step!

The first part of the walk comprised a gravel ‘senda’ (path) alongside the main road from Fromista to Poblacion de Campos, which was bearable for a while but I was glad to turn off to the right onto the rural route, which followed the banks of the Rio Ucieza. I passed through Villovieco and soon I enjoyed walking in the dappled light and shade cast by the avenues of trees and the gentle breeze blowing across the river. There was little to interrupt my reverie until I came to a hermitage and turned left to rejoin the road leading into the village of Villalcazar de Sirga, which has welcomed pilgrims since the twelfth century when it became a commandery (administrative district) of the Knights Templar. I spotted my new pilgrim friends Kenny, Mike, Martin and Jim and waved as I click-clacked past.

On the left as I entered the village, I noticed a lovely white, thatched round building. Behind it stood a cafe with a terrace overlooking the fields. I decided to stop for a second breakfast and met up with Melissa and her walking companion called Tom, who came from the US. We shared a table in the sunshine and I tucked in to a delicious slice of tortilla. That kept the stomach alien happy! 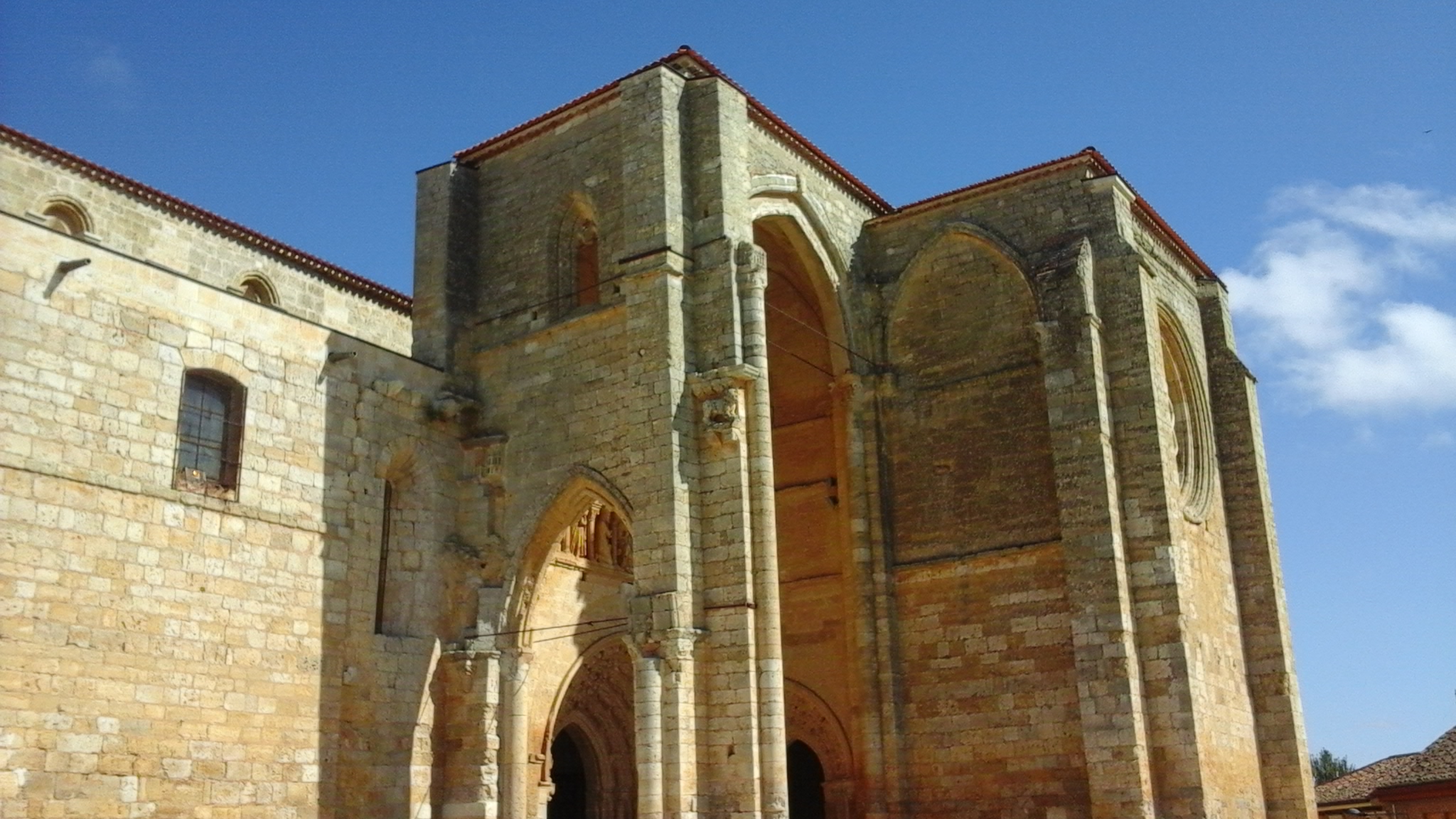 A few minutes later, I was on the road again and wandered along into the centre of the village. The Templar church of Santa Maria la Virgen Blanca dominated the square. Its honey-coloured walls rose up to the sky, cutting bold shapes against the cobalt blue back drop. I felt a shiver run down my spine. This church was erected in the 13th century and houses tombs of various members of the nobility of the day. It is now a national monument. I felt compelled to enter the draughty, and sombre looking building, for no other reason than to take a few moments of quiet reflection out of the glare from the mid-day sun. So I ventured inside and found a spot on an empty pew. I spent short while in prayer but felt quite uneasy and restless in my spirit. I walked all the way around the church and stopped for a few moments in front of the magnificent rose window. I remembered that rose windows are like mandalas in the east, performing a similar function to facilitate spiritual, emotional and meditative wholeness and coherence in the viewer. Certainly I found inspiration in the combination of perfect rotational symmetry, beautiful and intricate design and the way the rays of sunlight burst through the panes of glass.

As I drew my eyes away from the light, I reflected on the roles of the Knights Templar. For centuries their order has been steeped in legend, myths and mystery. Some scholars may say they had a noble mission to protect pilgrims on the various pilgrimage routes across Europe and the Middle East. That was indeed true, but it was not their only role. One of their prominent roles had been to serve as shock troops in the horrific and bloody Crusades, the transgressions of which have followed us right into the 21st century. In addition, they were responsible for setting up an early banking system, the pre-cursor to our financial institutions today. The Templars could be considered as the first multi-national corporation. Ha! We have much to blame them for! Thankfully, these days, el Camino de Santiago is safe enough not to warrant chivalrous protection but sadly, many of us pilgrims still depend on banks and ATMs. Ah yes, note to self, ‘I must remember to draw some cash out when I get to Carrion de los Condes’, I thought.

I was glad to step out into the sunny square. The sunshine lifted the uneasiness from my spirit and I found myself chuckling inside to  thoughts of ‘Monty Python and the Holy Grail’ in which, King Arthur’s knights encounter the eight foot tall Knights who say “Ni”. Could I hear the faint sounds of coconut shells, clip-clopping or the cries for a shrubbery? You have to watch the film! No, there was no shrubbery to be seen but I did notice the happy band of Kenny and company settling down in the bar opposite the church. They looked busy getting some drinks in and looked like they would be there for a while so I didn’t hang about to say hello. I felt the urge to trek on.

Another, largely uninteresting stretch of the Camino took me along the gravel senda into the town of Carrion de los Condes. I followed the signs to the main albergues, by passing Santa Clara and making for Santa Maria. However, the queue to check in snaked out of the door for quite a way, so I wasn’t sure if I would get a bed or not. I made the split-second decision to walk on further up the town. I bumped into the French guy, who I spoke to earlier in the morning. He had just arrived and went in search of his father, who had already booked them in somewhere. I pressed on through the narrow streets, enquired at one of the hostels but it was full. Never mind, I kept going and popped into Hostal Albe. To my surprise, my friend Tias, from Singapore, was at reception, booking himself and his companions into a room. I was happy to see him. Whenever I met him, he managed to bring me luck for good accommodation! This moment was no exception, I managed to book into a lovely, peaceful room with a bath for a very good price!

After showering and washing some items of clothing, I went out in search of an ATM and wandered around the town for a while. It was siesta time and there were hardly any places open. Feeling tired, I popped back to my room for a short nap, then I skyped Brett. I wished he was with me on the Camino. I would have loved to have shared so many enriching experiences with him. At least by skyping, pretty much daily or whenever I could find a wifi connection, we shared a few moments of the journey. I look forward to the day when we will walk together. We aim to walk the Camino Portugues at some point!

My stomach alien began crying out for food so I hunted down a place that was actually open before 8pm! I walked the entire length of the town to a place called Conde Garay, one of few places open at a reasonable time for food. I stepped over the threshold, and how should I see but the lovely Irish ladies Mary, Una and Mary again. They insisted I join them at their table for an excellent fry up! They told me they were staying at Albergue Santa Maria, where they had enjoyed a group sing-song with the nuns and fellow pilgrims. It sounded like a lot of fun! Over a glass of wine, Mary began to recite to the poem, ‘The Lake Isle of Innisfree’ by W. B. Yeats, with such passion that Una and Mary joined in, their voices rose in perfect unison to raise the rafters.  I will leave you with this poem for today.

The Lake Isle of Innisfree

I will arise and go now, and go to Innisfree,
And a small cabin build there, of clay and wattles made:
Nine bean-rows will I have there, a hive for the honey-bee;
And live alone in the bee-loud glade.

And I shall have some peace there, for peace comes dropping
slow,
Dropping from the veils of the morning to where the cricket
sings;
There midnight’s all a glimmer, and noon a purple glow,
And evening full of the linnet’s wings.

I will arise and go now, for always night and day
I hear lake water lapping with low sounds by the shore;
While I stand on the roadway, or on the pavements grey,
I hear it in the deep heart’s core.

Stay tuned for another exciting episode…

4 thoughts on “Carry on Templars!”