According to legend there is a monster and several lost souls wandering about on the moorlands between Olveiroa and Finisterre. I don’t think the myth was referring to lost pilgrims though, but who knows? Some of them could be. Perhaps they are those unsuspecting pilgrims, who are so dependent on their Brierley Camino guide to get them from A to B that they have forgotten to look around them for real landmarks ha ha! Jolly good! Can’t wait to meet them, I wonder if I can get through the moorlands, safely to the other side? I do love a challenge, I thought to myself as I stirred to get ready to leave As Pias.

My heart sank when I opened the shutters to find that it was pissing down with rain yet again! Oh no, not another soggy day in my ineffective rain poncho that rains on the inside. Having learned a painful, stinging, lesson on my way to Pedrouzo, I gingerly put on my bermuda shorts. I wondered how I could avoid the chafing this time. I will probably have to walk like a cowboy, with a wide, open gait…(I apologise if that is way too much information for you, but seriously, you need to be aware of such things if you are planning to walk any of the Caminos…). Still it’s better than a pair of wet, travel trousers, flapping about one’s ankles!

As Pias blessed me with a generous breakfast and I sat with a Spanish chap called Joachim, who used to be a vet but now is a natural therapist and carries out all sorts of therapies. I could tell that he has a gentle spirit about him. We talked about reiki and other forms of natural healing, another synchronistic reiki connection. We also compared notes from our respective stays in Castrojeriz and agreed that, for some reason, that place held a special kind of energy. Check it out for yourself when you are there!

Anyway, I dawdled a bit while getting ready, but still managed to leave the Casa Rural at sunrise. Not that I could tell where the sun was at all at that particularly moment, it was hiding behind the slate, grey rain clouds. Ultreia through the rain! Woo hoo. I clicked my way along the Camino trail, up out of the village of Olveiroa and ascended up onto the moorlands. The first stretch was a tad grim, especially around an ugly factory, where there was plenty of slip-slidey, grey, gloopy mud to negotiate around.  I walked on my own for a good while. There was something strangely soothing about walking through the horizontal rain, headlong into the mysterious fog like mist.

I bumped into Joachim (left) and a couple of pilgrims from Germany at a mobile, pit stop belonging to Carlos, who provided a range of refreshments on a ‘donativo’ basis. Of course, I poured myself a cup of coffee (no surprise there), to warm and perk me up a bit for the next stretch.

There was no need to hurry. Our damp, but happy band of coffee-fuelled pilgrims, walked on together for some kilometres, singing Taize chants, along the Camino trail, which had been recently churned up by diggers and tractors. It seemed as though the powers that be were turning this part of the Camino trail into a roadway. What a depressing thought!

Eventually, up and over a hill at Alto de Cruceiro, we caught our first glimpse of the sea. Wow, we were almost at the coast now, only a few more kilometres to go to Cee and Corcubion. The descent into the pretty, seaside town of Cee, was incredibly steep and a tad tough on the old knees. We followed the harbour wall round the bay and entered Corcubion, where we stopped at a lovely restaurant called San Martin for lunch. I ordered a delicious plate of calamari. What a treat!

On the road again, I bade farewell to my companions as I wanted to take my time during the remaining kilometres into Finisterre. In the words of Barry Manilow, I made it through the rain.  Yes indeedy, I safely got past the monster and several lost souls up on the moorlands and I bimbled and pootled my way to the end of the earth.

I nearly cried when I reached the last 2 kms along the magnificent, silvery, sandy arc of Praia de Langosteira. Like a giddy, child, once again on a family holiday by the sea, I struggled to untie my laces of my Saucony Peregrines. I was in such a hurry to change into my Tevas and ran as best as I could with my backpack on towards the ocean. I sloshed my way through the sea as the tide was going out and tip toed around the multitudes of scallop shells that decorated the beach, as if they were beckoning me onwards. 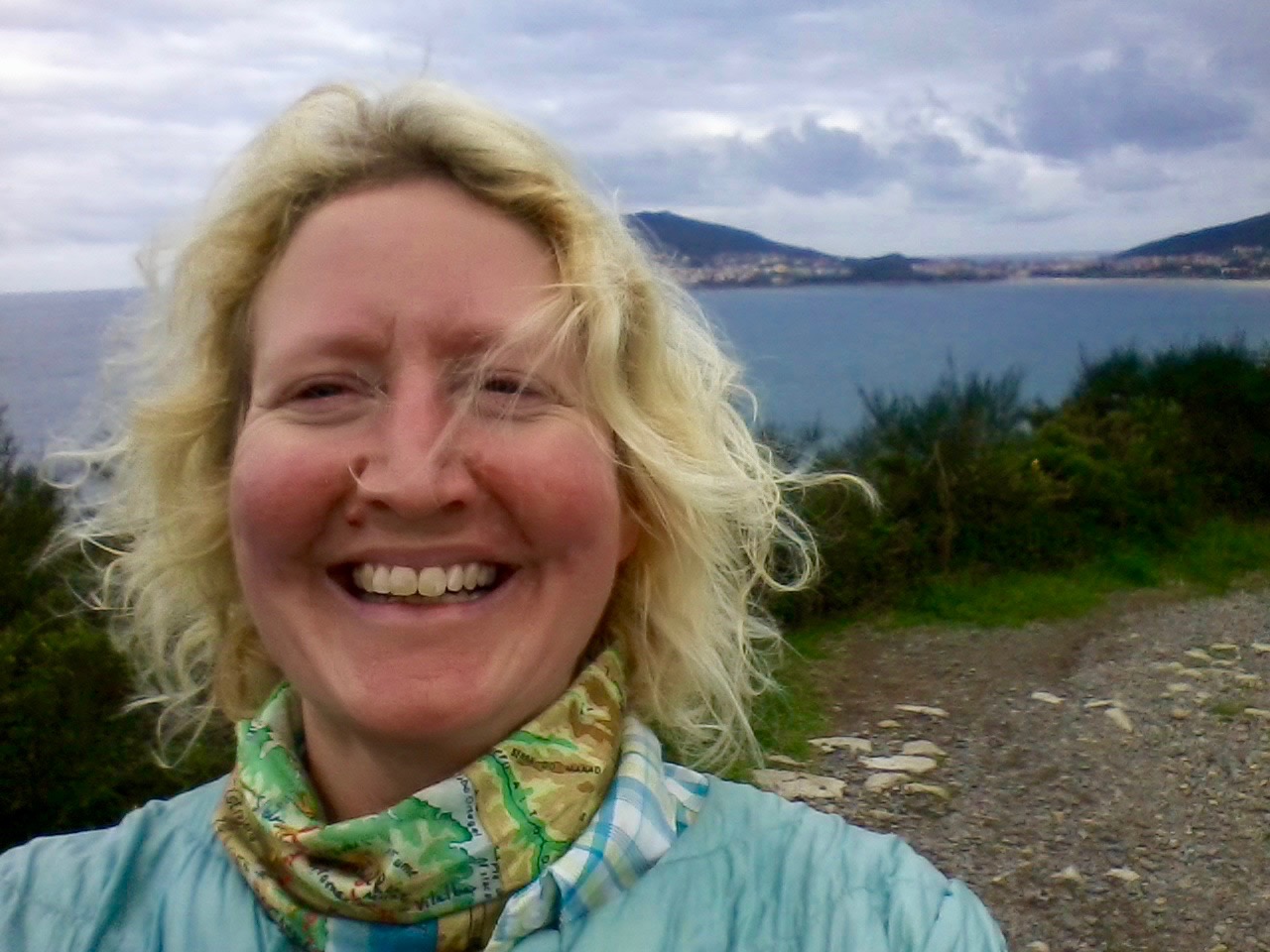 I sang a few refrains of a Taize chant to myself as I walked into the afternoon sunlight, which had popped out to greet me. What bliss! The icy, salt water, soothed my tired feet. A feeling of absolute euphoria enveloped me at that moment. I had walked 31.6 km in all today and I didn’t really want to leave the beach. However, I still had a kilometre or more to walk to my albergue for the night. I struggled up the stone steps from the beach up to the road and followed the road around the headland into town. Fiona was waiting for me in the entrance of Cabo de Vila after a bus trip from Santiago. Cabo de Vila is a great, family run albergue with fabulous, friendly service and a quaint room with shared bathroom.

I peeled myself out of my wet clothes, had a lovely warming shower and then off we went to explore the streets of Finisterre. We enjoyed some delicious hot chocolate at Cafe Mariquito and we waited there for our pilgrim friend Stefanie, from Holland, who turned up a bit later on. It was good to be among friendly pilgrims for a wonderful seafood dinner at O Centolo. Stefanie had also walked from Santiago in the last few days and we exchanged experiences from our respective treks, both of which, were incredibly profound in different ways. Stefanie planned to head back the next day, while Fiona and I looked forward to a stroll out to the headland in the morning.

All in all it was the perfect end to a rather long but interesting and amazing day!

2 thoughts on “Monsters and lost souls at the end of the earth.”