Well, us happy pilgrims  were up at OMG it’s early o’clock to leap into a cab to Luton airport. I can’t say I was raring to go as I hadn’t slept properly for two nights but nevertheless we got there in plenty of time to experience the loony  construction works and ‘cattle herding’ of passengers in between numerous rows of metal barriers. Luton airport did not score any points so far. Check in was a breeze though, probably the fastest bag drop I’ve had in ages, but going through security was a different story.

I set off the alarm at the full body scanner and subsequently experienced a jolly good frisking. The security lady seemed to enjoy her job a little too much and her handheld scanner beeped loudly as it hovered over my chest. I wondered whether it had flagged my boobs as weapons of mass destruction (or distraction…) but no.  Note to self, don’t wear an underwired bra next time. Perhaps I shall go bra-less all together on my next flight, it’s not like I would be at risk of knocking myself out during any kind of  turbulence, but alas I digress. Sorry.

The only saving grace at Luton airport, in my humblest opinion, was the Benugo café in the cramped departure lounge where we grabbed a reasonably healthy breakfast (raspberry porridge, breakfast bagel and coffee).  Yum. More cattle herding of passengers ensued onto the plane, when we were greeted by stern stewardesses on SleazyJet. We could barely coax a smile out of them and they made the WestJet staff, from our flight the week before, look like they were all on Prozac.

A couple of hours later, we arrived in Lisboa, and were ushered through immigration together as a married couple, instead of having to toddle off into different passport lanes. I gazed up at the EU channel sign affectionately, realising that come next year, if Theresa May has her way, we’d be out of the EU and I’d have to queue up in the “All other passports” lane…sniff, sniff. This whole Brexit nonsense feels like divorcing one’s family.

Brett and I opted for the metro into the city, when a kind lady thrust two Viva Viagem Metro cards into our hands as we came out of the exit. These are loadable cards like the Oyster in London, but green in colour and cheaper!  Apparently each journey on the metro costs only 1.25 Euros. Ah the metro! What a difference to the London tube! Easy to find our way around for the map didn’t resemble a massive tangle of multi-coloured spaghetti. We had space to move around inside the carriage, instead of being pushed up against someone’s sweaty armpit.

Baixa- Chiado was our stop, from which it was a short walk across one of the beautiful squares and down a couple of the cobbled streets to Cathedral Sé. Here we picked up our first pilgrim stamps and looked around. I found myself gravitating towards the beautiful luminescent, rose windows. 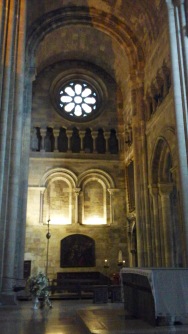 The place was teeming with people, probably from the three enormous cruise ships docked in the port so we sought solace in the smaller  Igreja de São Tiago, where the Camino Portugués route officially starts and found to our disappointment that it was shut. Somehow, this didn’t surprise me. It was the same on the Camino Frances, which inspired my poem “God is out”.  However, a kind tourist took our photo in front of the Camino sign.

Retracing our steps, we sat down in the sunshine by the bright yellow kiosk to enjoy delicious glasses of real homemade lemonade and some small pies – Brett scoffed a chicken pie, while mine was spinach and cheese, both with really short pastry. In the background a busker sang “Catch the wind” by Donovan. Bliss.

I wandered back into Cathedral Sé by myself to conduct a ritual I had kept throughout my Camino Frances pilgrimage – lighting candles for thanks  giving and blessings. I lit candles for my mum and  dad, who’ve now both passed on, my Auntie Josie (alive and well and who continues to encourages me in my daily life);  Brett and I to bless our Camino journey; Brett’s mum Peggy and sister Glory and Brett’s son, James and his partner Halanna and their two kids, Charlie and carter. I believe in the mystical and often feel as though guardian angels watch over us. 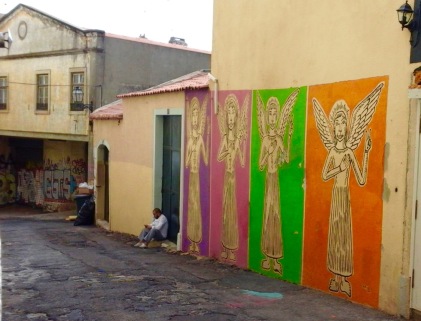 Feeling refreshed and energised we set off, eagerly on the Camino route following the familiar yellow arrows in the heat of the day.  However, we soon realised we hadn’t seen a single pilgrim, no familiar scallop shells bouncing on backpacks or trekking poles click-clacking down the street. Not a sausage! How strange in comparison with the starting point (or one of the starting points I should say)  of the Camino Frances in St. Jean Pied de Port, where an average of 300 pilgrims arrive and depart daily in peak season. 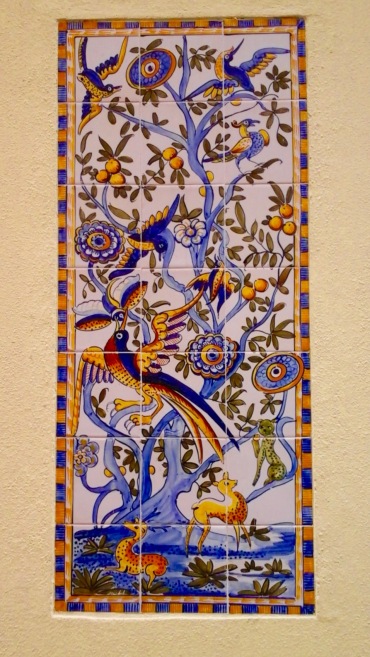 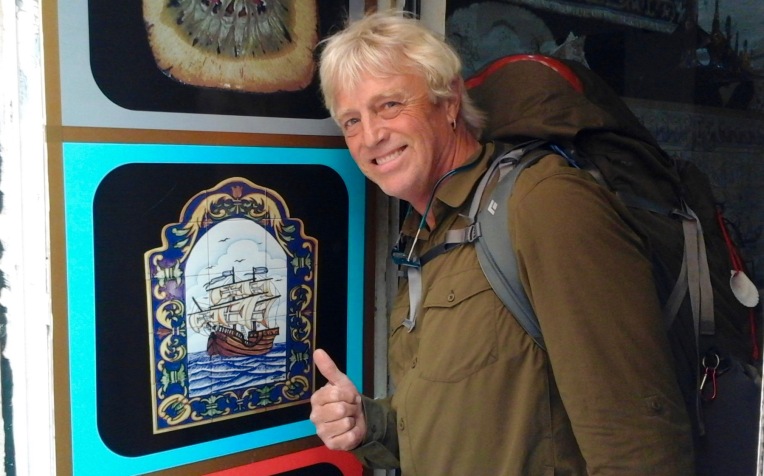 Lisbon’s beautiful, narrow, old cobbled streets, that were surprisingly smooth, with their pastel painted buildings and elaborate wall tiles delighted us. We had to tiptoe around lots of dog poo though. Brett and I challenged each other to spot the yellow arrows as we went along. They weren’t as frequent as the symbols on the Camino Frances.

The strong afternoon sunshine sapped our energy. Exhausted, we stopped at the Ideal café for a wonderful cup of reviving coffee and continued on our way following the waterline parallel to the port. We arrived at the Parque das Nacoes youth hostel, a modern, bright and cheerful place with friendly staff that stood off the Camino route, 800m to the left. We checked into a lovely clean private room with ensuite (38 Euros), at least twice the size of the Easy Hotel room in Luton. After showering and some laundry we went in search of dinner. We decided on Grande Mundo, down in the Expo area near the waterfront, which offered an ‘all you can eat Chinese buffet’ for 7.95 Euro, a bargain plus a half bottle of Portuguese red wine for about 5 Euros. Although prices seemed reasonable so far we’re feeling the pinch of the post-Brexit-vote-crash in GB pounds against the Euro at 1 to 1. Never mind, we have so much to be grateful for today! 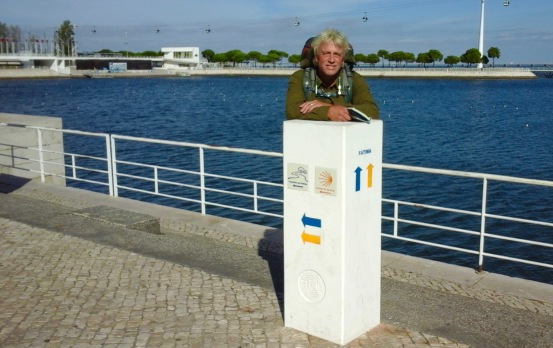 Distance walked –  10.2 km, but as the Camino Portgués guidebook by John Brierley says Lisbon to Santiago is 614 km whereas the sign at the start said 610 km, I’m not sure how many kms we have to go!

More to come soon, so stay tuned and feel free to click on the follow button to keep receiving blog updates! Thanks for reading.

6 thoughts on “BAM! And we’re off on the Camino Portugues…”