Well I thought it was about time I resumed writing up my blog about our stroll across Portugal along el Camino Portugues that we did between October and November 2016, after a somewhat long hiatus. During this break from writing, my husband Brett and I have spent some months working on our sailboat Theros to prepare her for our round the world voyage in ‘slow time’, as well as enjoying quality time with family and friends and training for the Vancouver Half Marathon, which we successfully completed on 7th May 2017. Phew!

You see, once you have walked your first Camino, all that exercise, the challenge of it all, the feel-good-factor of physical activity in the great outdoors can become addictive. It is hard to stop walking. Well it became addictive for me and so I plunged into the Half Marathon challenge pretty much straight away, after returning home from my second Camino, egged on by Brett.

The Camino Portugues is very different to the Camino Frances

Anyhow, I digress…The ‘long way up’ from Lisbon towards Santiago de Compostella has a very different feel, compared to my first pilgrimage on the Camino Frances in 2015. From Lisbon to Cernache so far, I reflect that:

It was our hope that things would look up, the further on we went! Ultreia!

And so, we rose from our beds in our little dorm in the albergue in Cernache, packed our backpacks and stepped out once again. Cernache was waking up. It was already light outside. This was OK because we only planned to head for Coimbra today. We aimed to get there by lunchtime so that we would have time to explore.

It didn’t take long before we were out of the town and winding our way along verdant forest trails. We paused briefly at the abandoned hiking boots that someone had painted blue and yellow, the colours of the famous Camino scallop shell symbol. Forlorn pilgrim footwear by the side of the trail is a common sight on the Camino, especially the French Way and this pair was the first we had spotted on the Camino Portugues.

The trail emerged by some factory buildings and a little further on we reached Palheira, where we paused to admire the local church, but alas the gate was closed. Shortly, we began our long climb upwards to the highest point of  the day Alto de Santa Clara. For some reason, we found ourselves singing “Where have all the flowers gone”, by Peter, Paul and Mary, to accompany our ramble.

Up and over the summit, we caught our first glimpse of Coimbra in the distance. I felt a lightness of being, knowing that we would soon be able to explore this beautiful city.

On our way down the steeply, sloping hill, we joined a crocodile of walkers in brightly coloured clothing, who were carrying placards and headed towards the large convent of Santa Clara, which overlooked the stunning Mondego river valley. 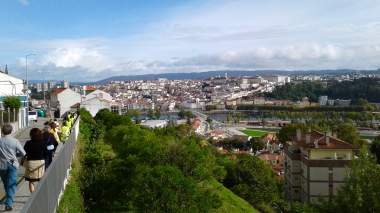 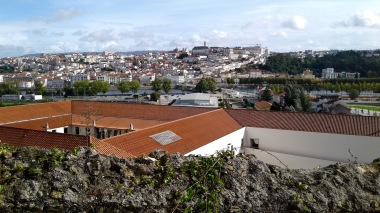 The procession was part of numerous celebrations honouring the 500 year anniversary of Rainha Santa Isabel’s beatification by the Catholic Church. Rainha Santa Isabel is also known as Queen Elizabeth of Aragon, a remarkable lady with a fascinating history. She was certainly a woman of devout faith, served the poor and sick, was the benefactor of schools and hospitals, provided accommodation for pilgrims, founded the convent of Santa Clara and mediated between warring houses and countries on several occasions. Santa Isabel earned her title ‘peacemaker’ owing to her efficacy at solving disputes. After her husband, King Denis passed away, she retired to the convent she had founded and joined the Third Order of St. Francis.

At the gates to the convent of Santa Clara, Marion, our pilgrim friend along the route so far, ran towards us and beckoned to us to join her at the albergue inside.  We explained that we had booked in to a Hostal in the centre, one of Pedro‘s recommendations and bade farewell. We tramped down the cobbled streets and over the long bridge, spanning the river into Coimbra. Whether it was the strong sunshine, or the excitement of arriving, I don’t know but Brett tripped, fell off the pavement and into the road. One second he was there, chatting happily next to me and the next I found myself replying to thin air. Thankfully he bounced and in a split second was back on his feet, a little bruised but intact.  Phew! That was a close shave in the busy traffic.

We were more mindful after that of where we were putting our feet! Oh no another hill! Straight up the narrow, cobbled streets to find our accommodation for the night. Hostel Serenata, nestled in the corner of a narrow square, overlooking the old Romanesque cathedral, Sé Velha. Hostel Serenata welcomed us into a beautiful, quiet, private double room in their annex, overlooking the cathedral for 37.5 euros for two including breakfast (shared bathroom).

I couldn’t wait to slip off my trainers and socks and put my feet up on the bed for a few minutes. We opened the shutters and realised we were not so far above the cobbles, in fact almost at eye level of the passers by. And there were many. We witnessed yet another procession, perhaps for Rainha Isabel, serenading and snaking its way through the square.

After a brief rest, we explored the city and stopped for  lunch in Café Montanha near the river, which wasn’t bad for a snack and afforded a great vantage point for people watching, while we sheltered from a sudden downpour.

Coimbra was the original capital of Portugal from 1145 until 1255 and is famous for it’s University, founded in 1290. I wondered if Coimbra had any issues of “Town and Gown”, that some of the older university cities in Britain experienced, such as Oxford, Cambridge and Durham i.e. notable divisions and tensions between local residents and student communities.

Interestingly, as Brett and I climbed higher through the narrow, cobbled, streets towards the University quarters, we noticed an increase in the amount of graffiti painted on the walls, giving a dank, disaffected and grungy feel to the atmosphere. Now, don’t get me wrong, I do believe in freedom of expression and I can look at street art as just that. However, there is an awful lot of graffiti out there that does not really provoke any thought other than “I wish I had a sponge to wipe this away…”. 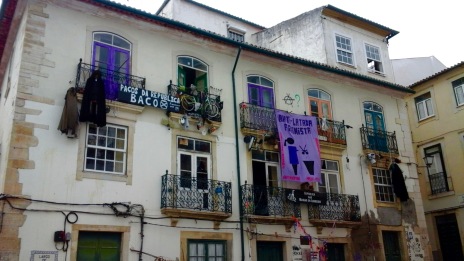 Clearly, some of the students expressed their anger and frustration at the Government of the day. Some had quoted famous literary characters, and these seemed well written and poetic. However, others lacked imagination…or hinted at the use of certain plant based substances to enhance theirs…

Nevertheless, I am always encouraged when I observe signs of critical awareness, even if grammatical correctness appears to be lacking…

I loved strolling around with my husband, admiring the slogans (or not), the famous Portuguese ceramic art, the views and boats on the river and window shopping in the numerous boutiques and artistan shops. This is one of my favourite things to do on the Camino Portugues. I realised that we share an easy companionship, sometimes lighthearted and silly, othertimes deep in thought and conversation, when we chose to grapple with meaty, global issues. I am grateful for having married my best friend!

The afternoon stretched into early evening and soon the light changed to dusk.  We searched for a cosy place to enjoy our evening meal and opted for Jardim da Manga, a restaurant by some fountains that resembled an old spa. Here, we sampled their signature roasted goat meat and it was absolutely delicious. It took me back to my days as a humanitarian aidworker in East Africa, when I often ate ‘nyama choma’ (roasted meat, particularly goat meat) with my friends.

All in all, we had an enjoyable day exploring the sights and sounds of this historic city and perhaps we may return one day in the future.

There will be another exciting instalment coming to your screen soon!

For now, thanks for reading.

Sending you much peace, love and light,

5 thoughts on “A Coimbra serenade of one remarkable woman, the peacemaker queen.”