When we returned to our cosy room after dinner with Marion, Brett became slightly perturbed, when he noticed an enormous house spider in our room with very long legs. I think it must have been hiding in one of the thick blankets and scuttled out when we made up our beds. Bless.

I don’t mind spiders. I’ve always been fascinated by animals since an early age, even the creepier-crawlier ones, when Sir David Attenborough, David Bellamy and Gerald Durrell inspired me through their nature documentaries and books to study biology. 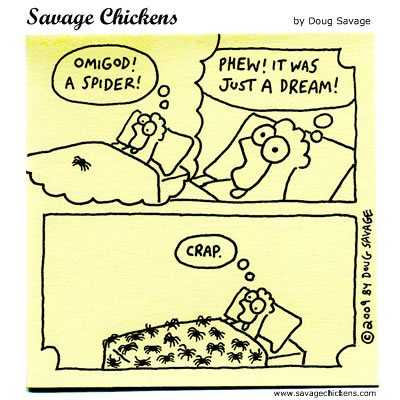 All of sudden, our leggy housemate scarpered across the room and under Brett’s bunk bed. Just for a nano-second, I could have sworn I saw a stricken look cross my husband’s face, but it could have been a trick of the light.  Now, Brett isn’t afraid of anything, you understand? But…the only thing worse than seeing a large spider in your room (that is…if you happen to have a phobia…but my hubby hasn’t) is then not seeing it. It’s the not-knowing-where-it-went-and-imagining-what-it-can-do-while-you-are-sleeping that can freak some people out.

I calmly reassured my husband, even though he didn’t need any, by describing this meme to him…

And so to bed and restful, blissful sleep….

Breakfast the next morning was a calm, Lidl affair at first light. I wished for more opportunities to create our own breakfast, instead of relying on the coffee bars along the trail. I willed my stiff legs and sore feet into action on the long trek out of town and into the countryside once again.

At least there were a couple of beautiful spots to pause and admire the tranquility of being by fresh water. 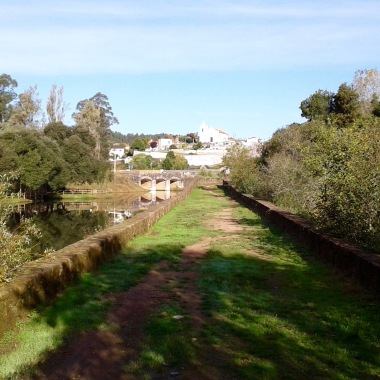 A troubled bridge over water

We tramped through Mourisca do Vouga, Trofa and Pedaçães in the direction of the Ponte Romano (Roman Bridge) but were suprised to discover that the Camino trail had been diverted back along the N1 and the road bridge over the Rio Vouga. From a giddy height above the water and glancing to the right, we could see why.

The other bridge was broken. Sheared off in the middle. The pathway ending abruptly in thin air. Imagine cartoon pilgrims walking over edge treading air, furiously, as if in a spin class on invisible bikes or like Wile E Coyote.  I wonder how this happened? Could it simply have been the erosion of time and water flow? Or the collective mass of overweight pilgrims after too many second breakfasts that caused the collapse? Come on people, own up, who broke it? It’s a mystery. I remained grateful for the robustness of the road bridge at that point in time.

Soon we were able to escape the business of the N1 and found ourselves on the Camino trail to Serem de Cima and then ascended up through eucalyptus woodland to 125 m. Today’s walk was certainly hilly and hot. The trail led us down to Assilhõ and into the charming and colourfully tiled Albergaria-a-Velha, where we admired the flower beds and the elaborately decorated buildings.

Seven more kilometres to go and we pressed on to the Statue of Our Lady before ambling, sweatily, along a humid forest trail into the bustling town of Albergaria A Nova. Here, after much pounding of pilgrim feet on pavement we eventually arrived at our hostel for the night – an albergue of the same name, Albergaria A Nova, a large, family run house by the side of the noisy main road.

For 10 euros each and 2 euros each for brekkie, we bagged a rather grand, private double room with shared bathroom.  The family, who ran the hostel were incredibly friendly, well organised and accommodating. They went the extra mile, literally, by driving us back along the busy N1 to find the local supermarket so we could buy goodies for our evening meal. We were so relieved, as I don’t think we could have managed another 2 km walk there and back!

The pilgrim kitchen was clean and well equipped.  After doing a spot of laundry, as usual, during our daily routine, we cooked dinner and turned in early, to sink into our enormous bed, and hopefully soundless sleep….not a spider in sight.

Stay tuned for another exciting episode…

2 thoughts on “OK, so who broke the bridge on the way to Albergaria a Nova?”