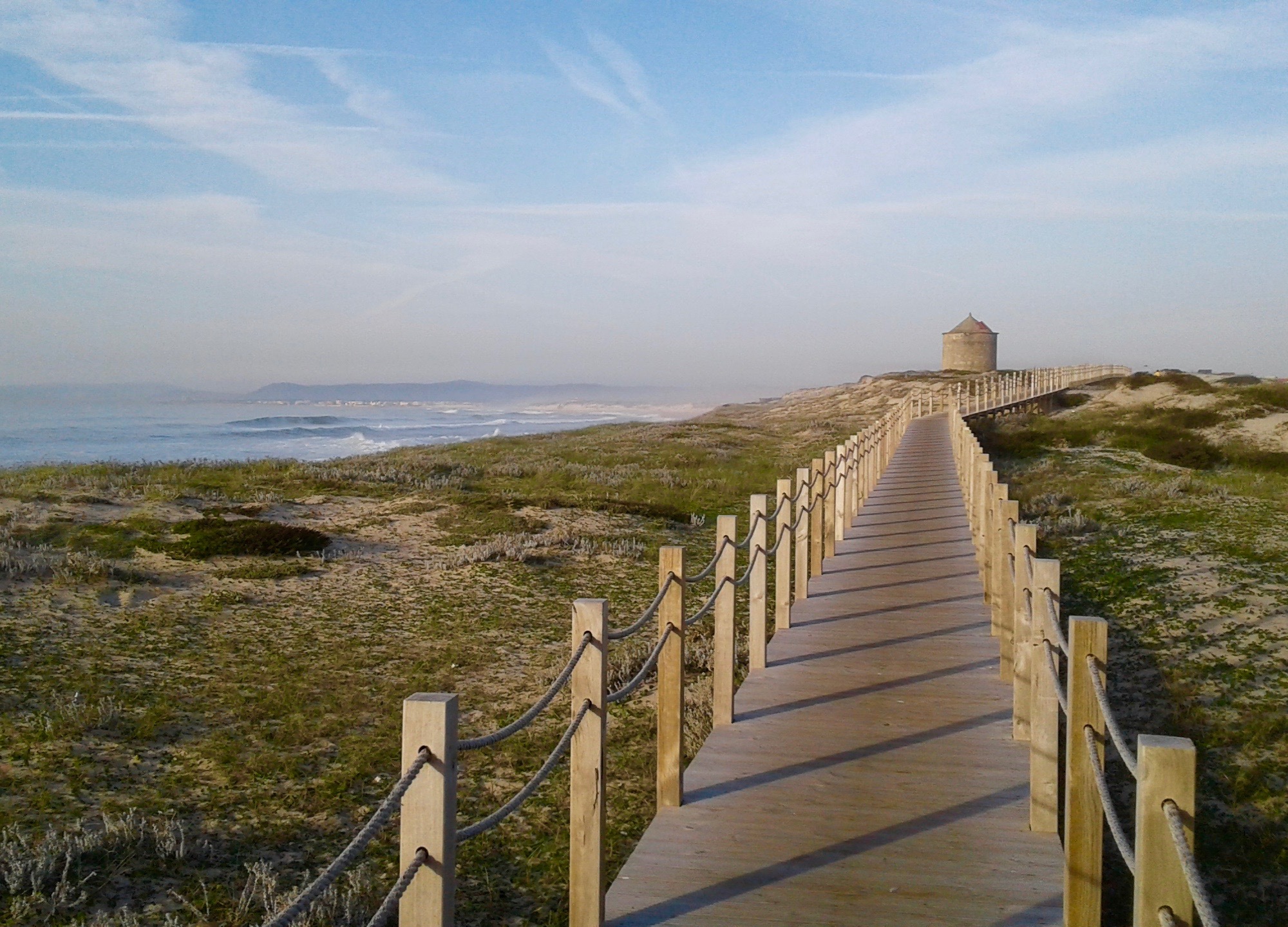 Brett and I walked straight down and on to the beach as dawn broke. Watching the waves crash onto the beach made me glad to be alive. Already, these first days of our coastal route made up for the tough slog we had encountered, more often than not along the main highways and through industrial estates, that had characterised the Camino route from Lisbon to Porto.

A short distance away stood replicas of roman salt tanks, which reminded us how communities thousands of years before us had depended on the natural resources from sea and strand.  We strolled across a small bridge over a stream, wending its steady way out to sea.

About four or five km up the coast or so, we found a café that was open for coffee and croissant. Hurray! Breakfast…It’s a good thing to fuel up for the day’s walk ahead! I’m always hungry on a Camino.

We spent most of our day ambling on boardwalks over the broad and unspoilt beaches with exotic names – Praia de Labruge, Praia de Moreiro, Praia de Mindelo and Praia de Arvore. The wooden boards, provided our feet, ankle and knee joints with gentle respite from plenty of days walking on hard asphalt. 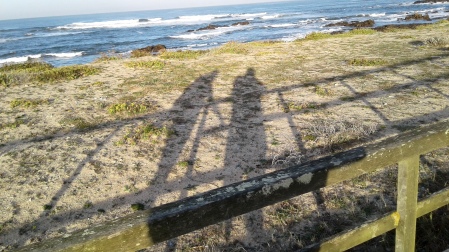 Soon we reached Vilar do Conde, a charming old town, that oozed plenty of marine history as it used to be a major centre of Portugal’s boat building industry. We paused a while to visit the dome church, the Capela do Socorro built in 1603. I was so happy to find a chapel that was open during the day.

We admired the boats in the harbour and the gigantic mermaid sculpture in the square. An older man approached us to ask where we were going. He seemed both curious and kindly. Brett sensed a kindred spirit. As it turned out, the man had worked in the navy and was a chief engineer. By strange coincidence (or synchronicity) he had worked in England north sea supply ships and in Canada on fishing vessels! We discovered that he was 78 years old (but looked far younger) and had been to Santiago twice.  He mentioned that there was an albergue at Esposende.

In addition to boat building, Vila do Conde was also famous for its cod drying industry. Along the trail you will see remnants of cod drying racks and a vibrant, larger than life mural honouring the women, who were the backbone of this practice.

A little further on we came to Povoa de Varzim, where we strolled out to the fortress and also stopped to admire the unusual lighthouse church. 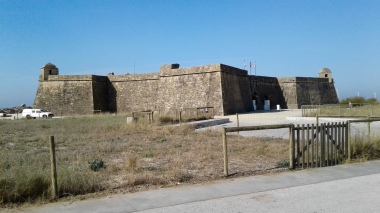 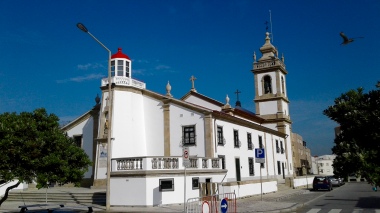 Brett found a Gibsea 52.5 ft sailboat in the marina, another pleasant, nautical encounter of the day! Taking this to be a good sign, we stopped for a tosta mixta and ice tea on the prom, then walked around for the bank and came full circle. 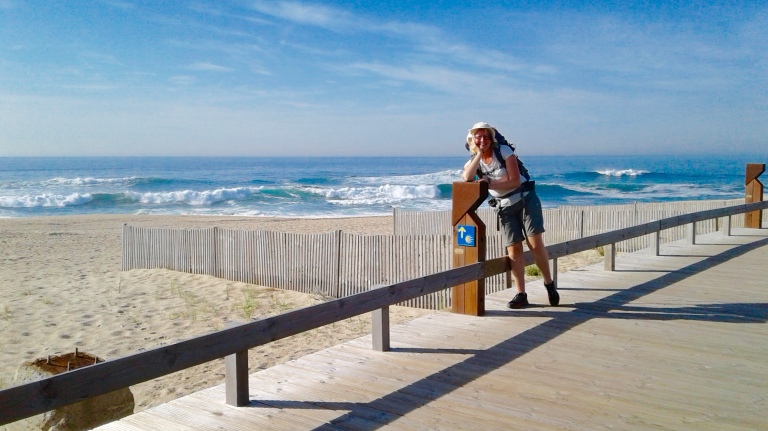 Reluctantly we left the boardwalk behind as the Camino trail took us inland later in the afternoon. We paused for another ice tea in a village and the lady kindly gave us directions to the nearest camping  ground, explaining that Estela was the next stop and not Esposende because that was a further 10 to 12 km trek ahead. There and then we decided to make for Estela campground and not Esposende we were flagging by this point!

After that village,  the trail took us through agricultural and horticultural poly tunnels and football grounds. Eventually, just as the sun was beginning to dip down on the horizon, we reached Orbitur campground. However, how different it was to the last one much less friendly and welcoming! Oh dear what had we done? Although the cost was the same to have a similar cabin, the loos and showers were further away and the restaurant was closed for the season.

We perused the tinned frankfurthers and baked beans on offer in the shop and debated whether to go for it, but soon realised that there were no cooking facilities available to us. Arrggghhhhh! What, no welcoming pilgrim meal? Feeling slightly downhearted and inclined to start chewing the chair legs off, we called a local taxi in the hope that some establishment would be open and serving food!

A friendly taxi driver called Francisco, who happened to have a niece in England, turned up and at once took us to a lovely, local restaurant called Solar de Criaz, in nearby Apúlia. What an earth angel!  We had to wait unti they opened as we were a tad too early.  Like in Spain, Portuguese evening meals are served later on. No matter. We were more than relieved to wait and I’m happy to report, we had our best Portuguese meal yet. Bread and olives, cod fish cakes, mixed salad and then the house speciality of cooking beef on a hot stone, Brazilian style, with new potatoes in their skins, in olive oil rosemary and sea salt and black beans, rice and sausage. Wow!

Full to bursting we returned, with Francisco, to the camp ground, where it didn’t seem such a bleak place after all. That is, until I went to use the showerblock and wash my clothes…after wine.

All was going well until I noticed something out of the corner of my eye. A black cat was in the shower block and kept staring at me, expectantly or perhaps I mistook its expression for something of more sinister intent?  It was Halloween after all…

2 thoughts on “Nautical encounters on the Camino to Estela”