After the curious happening at the albergue last night, I can’t say that either of us slept very well. At least no physical fight had broken out but I guess we were both on tenterhooks, plus there was the usual cacophony of snores, heavy sighs and grunts signifying pilgrims at rest in a shared dorm. I tossed and turned throughout.

We awoke to rainfall on the windowpane. Oh dear! This did not bode well. While Brett and I packed up, I pulled out my rain poncho.  I turned round to face the door and did a double-take. OTT pilgrim stood there in the hallway, as if in defiance, hands on hips and dressed like a ninja. I couldn’t tell if he was contrite or not, about his odd outburst the evening before, because he was wearing a balaclava.

You know the kind bank robbers and members of various military groups wear?  It wasn’t even cold! So as not to appear perturbed in any way, shape or form, I called out a good morning as though it was the most natural thing in the world to encounter a balaclava-wearing-ninja-pilgrim before breakfast… A silent stare in response.

I didn’t labour the issue but carried on finishing my packing. Seemed to be the best option at the time…“get me the hell out of here…” said the voice inside my head.

We wished our fellow pilgrims a “Bom Caminho”  as one by one we trickled out of the albergue and spilled onto the street. A few moments later, Brett and I took refuge from the rain in Café Belmar up the road, enjoying hot coffee and breakfast, waiting for the rain to blow over.

Ultreia! Off we went in a subdued mood, the event of the previous evening weighed heavy on the heart, coupled with the grey sky and drizzle.  For a coastal route the Camino trail led us strangely inland for a way. We could only see the sea off in the distance and I missed walking by the ocean. 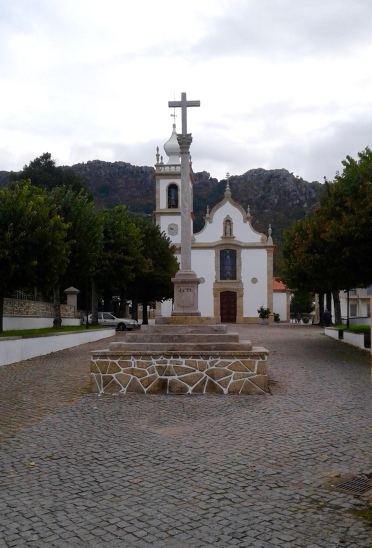 Cobbled streets, not boardwalks, enticed us onwards, past elegant, white-washed chapels, sadly closed to us today.  Painted tile friezes depicted pilgrims on the Camino. We knew we were still on the right trail then, despite no guide for this part!

The Camino meandered through tranquil woodland. We bathed in its cooling, green and verdant beauty and at once my melancholy mood lifted. We paused briefly at a stone waymarker indicating the administrative area of Antas. Here, pilgrims had left several offerings, including pebbles, which reminded me of the simple, yet powerful and liberating ritual of placing a stone at  the foot of the Cruz de Ferro, near Foncebadon on the Camino Frances.

The stone can represent anything you choose from your life, perhaps it symbolises a burden you have been carrying or a prayer for someone in your family, or it signifies something you are immensely grateful for and wish to acknowledge this in some physical form.

Whatever it is, to me, the act of surrendering it at a spiritual spot symbolises the interconnectedness of all things with all that is and acknowledges the co-creative power available to us in concert with the divine (whichever way you view what the ‘divine’ means).

This waymarker and the colourful offerings around its base, reminded me that we are connected to the countless pilgrims, who have trod the path before us and who are yet to pass this way in future.

For a fleeting second I found myself wondering where ninja-shouty-balaclava-wearing-pilgrim was and hoped he was having a good walk, wherever he may be.

Spirit flows where it will. Just like water finds the path of least resistance in a burbling brook. Thankfully, we were not too far from water on our walk and the energy it brings. We came to a river running through the forest and crossed a low stone bridge as happy as hobbits on the way to Rivendell.

A kind of neptune

Our woodland pathway brought us out into the open again and to asphalt for the remaining day’s hike into the city of Viana do Castelo. The city’s skyline was dominated by the imposing architecture of the Basilica of St. Luzia on top of Mt. Luzia, overlooking the streets below. Neither Brett nor I felt we had any ounce of strength left to hike up the steep hill to visit it at this stage! 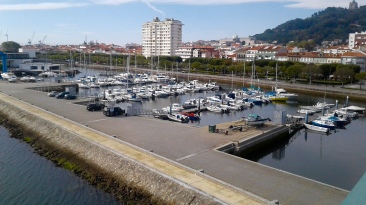 We walked past a small marina on the way into the old town. Viana do Castelo is a magnificent and elegant city with beautiful architecture to be discovered at every turn along the narrow cobbled streets.

Brett and I were able to find accommodation quite quickly. We opted for a room at the Residencial Viana Mar instead of an albergue so that we might have a chance of catching up on some sleep.  At 40 euros for a double ensuite room, it seemed a little bit more expensive than we had hoped but breakfast was included and the location was certainly convenient for us, being bang in the centre of the old town.

After settling in we ventured out, once more in the afternoon sunshine to explore the old town. We popped into the Catedral Sé for a moment and I drank in the peace and tranquillity away from the hustle and bustle only a few feet away. 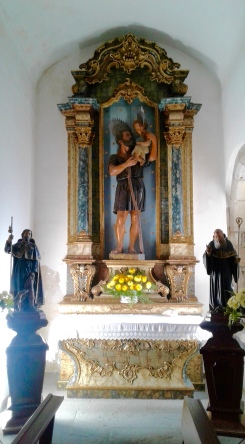 Although the adornments were stunning, I did not feel as ‘connected’ as I did when I stood in front of that simple, stone waymarker and pilgrim offerings. Perhaps I was tired  and it was my imagination playing tricks on me or maybe, the divine is found elsewhere, a, conclusion I came to repeatedly on the Camino Frances and summed up in this poem “God is Out”. 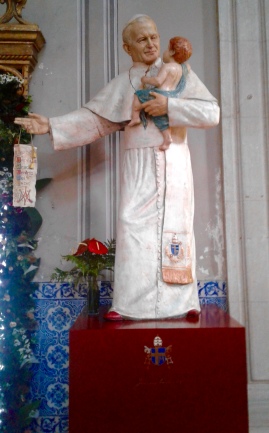 Outside in the Praça da República, Brett and I found a table at a café to enjoy a late lunch and shandy. It was a great spot to people watch. I was content to sit still and bask in the remainder of the afternoon sunlight.

Across the square stood a fountain with two remarkable statue figures rising up from the water. Instantly I thought the sculpture portrayed the sea god Neptune together with a sea goddess.  Later on I discovered that this artwork honours the Portuguese explorer and colonist Diogo Álvares Correia, who was born in Viana do Castelo and his wife.  He set sail for Brazil in 1509 but was ship wrecked, probably on the reefs off Rio Vermelho.

Allegedly, while drowning, the explorer discharged his gun and killed a bird. Somehow, he managed to survive and found himself alone among the Tupinambá Indians, who gave him the name “Caramuru”, their word for the Moray Eel, owing to the fire from his gun. Correia married Paraguaçu or Paraguassu, the daughter of Tupinamba’s chief Morubixaba Taparica and spent the next twenty years or so mediating between European ships and the local people to benefit the Portuguese crown and missionaries during the early colonization of Brazil. The piece of art represents Caramuru and Paraguaçu.

Feeling tired, we returned to our Residencial for a rest. We ended up sleeping through dinner, 14 hours straight until the next morning!