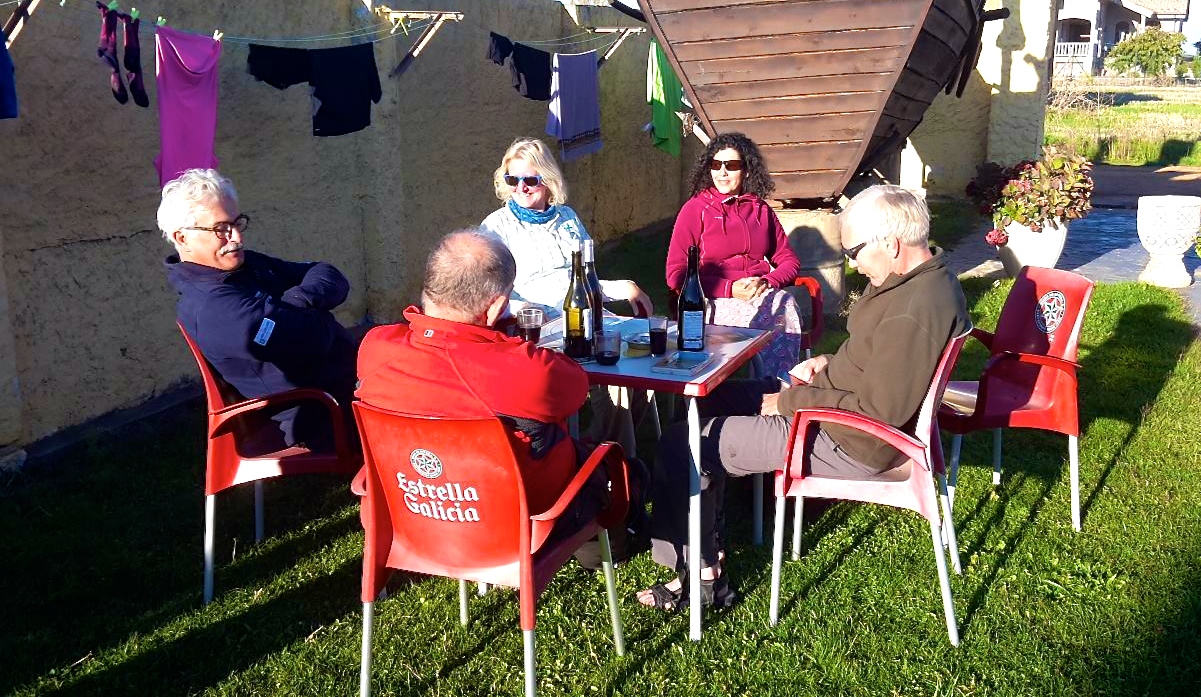 Well, the rest day and a half in Leon did me the world of good. I got my Camino-mojo back and I was also happy for Fiona, who began her pilgrimage today! We got up reasonably early and set off. Fiona’s eagle eyes spotted the Camino trail straight away as we clicked our way out of the Plaza Regal, towards Plaza San Marcos, waving goodbye to the Parador on the way out of the city. Our goal was the little village called Villar de Mazarife, approximately 22 kms away along the green route, where the Camino divided into two routes in the suburb of La Virgen del Camino. Looking at the elevation chart in the Brierley guidebook, I could see that the countryside appeared to be gently undulating so it seemed to be reasonably straight forward.

The air was chilly, making my nose run (pilgrim’s nose) and we worked up some warmth, while clicking through the busy streets and up a long, slow hill out of the main city into the suburb of Trobajo del Camino. We hadn’t had breakfast before we left Hostal Albany, so we dipped into an open bar and grabbed a coffee and pastry before venturing into a grim looking stretch of the Camino in the industrial zone. I noticed a steady trickle of pilgrims going past, not quite the usual pilgrim rush hour!

The next 3 or 4 kms was a tad heavy going as the Camino route ran parallel to the traffic laden autopista and was very noisy and not that picturesque really. No surprises there. Still it seemed a tad better than the stretch into Leon from Mansilla de las Mulas, but perhaps that was psychological as I was no longer so exhausted. A short while later, a lady appeared on the street outside a cafe, carrying a tray of deep fried doughnut like objects. I’m assuming these were churros. They reminded me of ‘mandazi‘ (or Swahili bun), a tasty but somewhat artery clogging snack, that my team mates and I used to eat, when we worked in the camps in Ngara, Tanzania. Funny how distant memories are triggered by all sorts of sights, sounds and aromas, again the past is intricately connected to the present and future along the Camino.  I politely declined the offer to try one because I wasn’t convinced my stomach alien could cope with the grease at that time in the morning. However, Fiona and I felt a coffee stop coming on so we ventured inside and who should we see at a table in the corner but two of the Four Pissed Pilgrims – Mike and Martin (ha M & M!). They invited us to join their table. Out came the Brierley guidebooks to compare routes. Apparently, they had temporarily mislaid their chums Kenny and Jim, who were somewhere up ahead, or so they suspected. They were not sure where Kenny and Jim, were heading for that day but Mike said Kenny had mentioned the Albergue Tio Pepe, so between us we deduced they were also going to Villar de Mazarife.

Detective work done, it was soon time to move on and get going again. We wended our way, slowly but surely up a long, shallow incline towards the edge of the suburb La Virgen del Camino and veered off to the left past the Hostal San Froilan, to pick up the green route. We had about another 14 kms to go across the open paramo countryside.  We stopped for a few minutes to chat with fellow pilgrims Pina and Martin from Germany and then pressed on. Soon Mike and Martin went on ahead, picking up speed. Fiona and I decided to continue at a slower but steady pace.

The Camino trail through to Fresno del Camino was not all that interesting to be honest, but I got a totally different perspective when I looked back, over my shoulder, towards Leon. The views were fantastic and very encouraging, in terms of the distance we we had already walked. Fiona and I chatted, and trundled, click clicking along to Oncina de la Valdoncina. The signboard at the village entrance was almost bigger than the hamlet itself! I have to say that in Castille y Leon, the Camino is well marked compared to the Rioja region, but the village and town signboards were a bit rubbish. Yes, they displayed maps but usually these were not that helpful, having a few blocks of orange colour for buildings and wiggly lines showing the Camino route, but not much else! Certainly they were devoid of any useful labelling!

The rich red earth pathway snaked on ahead, presenting another visual reminder to me of the local roads in East Africa, where I had lived and worked as a humanitarian aid worker a few years previously. We strolled on through the welcome greenery of woodland, providing some shady spots to stop now and again. The sun was strong and one thing we kept reminding ourselves to do was to stop and sip water at regular intervals. It takes a while to get into the habit of regular rehydration but I soon found that when I had established this as a daily practice, I drank at least 2 to 3 litres of water on average during walking hours. It’s a habit I intended to take forward with me on my return home, as I found I was less tired and had more energy.

Soon, the quirky village of Chozas de Abajo came into view, with its rather, strange, futuristic looking church bell tower, piercing the sky like a gigantic arrow head. We rounded a corner into the square, where there was a cafe come restaurant on the right hand side. Mike and Martin kicked back at a table on the terrace and waved to us to join them. They kindly offered Fiona and I some of their lunch – baguette, ham and cheese,  which was well received and more filling than my trail mix. We must have looked starving! I enjoyed relaxing in the bright sunshine. How lovely it was to be outside pretty much all day long every day. Mike and Martin, still hadn’t found their buddies but they didn’t have to wait for long because Kenny and Jim, accompanied by Roisin came into view. The other half of the Four Pissed Pilgrims exclaimed in mock horror, that we had eaten ‘their’ lunch, ‘how could we?’ Oops! Would they forgive us? Only time will tell…

Four more kilometres later and our happy band of pilgrims rocked into Villar de Mazarife. Although Kenny had originally intended to go to Albergue Tio Pepe, where he had stayed before, he and the lads decided to join us at Albergue Casa de Jesus and Roisin came along too. Casa de Jesus had a nice ring to it, I thought, yeah Jesus’ house. Why not hang about in Jesus’ house? Seems the right place for pilgrims to be.

The Albergue was colourful and welcoming, if a tad bizarre, owing to the eccentric wooden ship beached on the front lawn. Where were the pirates I exclaimed? No Captain Sparrow to be seen. Arrrghhhh! Next to the ship stood a vivid, bright blue, concrete swimming pool, tempting unsuspecting pilgrims to dive in. But alas, the pool was empty! Shame, no chance for me to break out my bikini and go for a swim then. Thankfully, we had arrived when there were still dormitory beds available. Fiona, Roisin and I shared a small dormitory room of four in the middle of the first floor with another, very quiet pilgrim, while the Four Pissed pilgrims bagged the dorm next door.

After the obligatory hand-washing of laundry and hanging it out to dry next to the ship, I popped out onto first floor veranda, which was a lovely sun trap and happily spotted Dale and Shelley, who had arrived some time earlier. It was great to see them again! Dale was busy doing a rapid emergency repair on Shelley’s foot and we laughed and talked about the easiness with which, pilgrims felt so at home with each other, that they could take their socks and shoes off and bear their noble Camino wounds!  Shelley bore her ‘surgery’ with a brave smile and drew my attention to the graffiti on the walls. One lengthy piece of prose, caught my eye, written by a Cuban pilgrim. It was a poignant and clever story from the perspective of his pilgrim shoes. Wow, the creativity among a diverse range of pilgrims from all over the world, never ceased to amaze me!

Later on Mike and Kenny suggested preparing a communal meal for ten of us and we did a quick, whip round to contribute some euros to the kitty. Jim and Roisin leapt in to help with the preparation and cooking. Roisin was in her element as she loved to cook. At several points on the journey, whenever I met up with Roisin, I was inspired by her passion and talent for raw food cooking. Martin and I helped with laying the table and offered to do the washing and drying up. 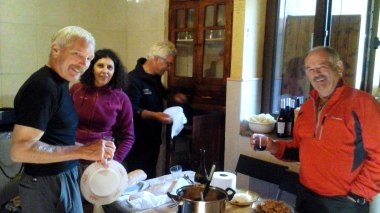 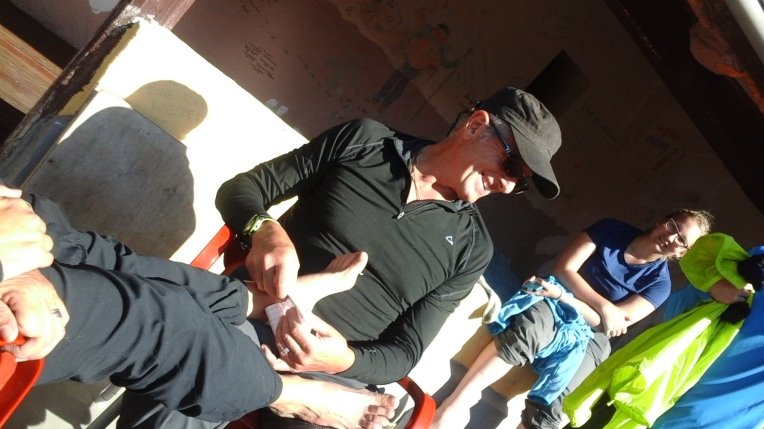 The meal was a delicious three course affair, washed down with numerous bottles of wine (no surprises there) or an orange-soya drink. Our friends from Germany, Melissa, Pina and Martin joined us at table and the atmosphere was became alive with stories and hilarious jokes. What a buzz! An overwhelming feeling of love filled my heart as I observed the smiling faces around the table.

I found myself reflecting on the way of life Jesus introduced to his disciples. Sharing bread and wine at table was a powerful symbol of fellowship and brotherhood. Jesus sent his disciples out in pairs, from village to village. They took few belongings with them en route and depended on the kindness of strangers for hospitality and meeting their basic needs. In return they healed the sick, gave to the poor and shared teachings through parables, as well as committed subversive acts of non-violent resistance to the oppressive Roman regime of the day. It struck me that the simple way of life on the Camino, echoed Jesus’ model of mission in many ways, although obviously times had changed. However, table fellowship still remained a wonderful illustration of the bonds of friendship pilgrims share, connecting us all from many different countries and backgrounds to one human family.

I will leave you to ponder on that note for now. Don’t go too far away.

Do you wonder what happened next? Stay tuned to find out…

2 thoughts on “Hanging about in Jesus’ house in Villar de Mazarife.”