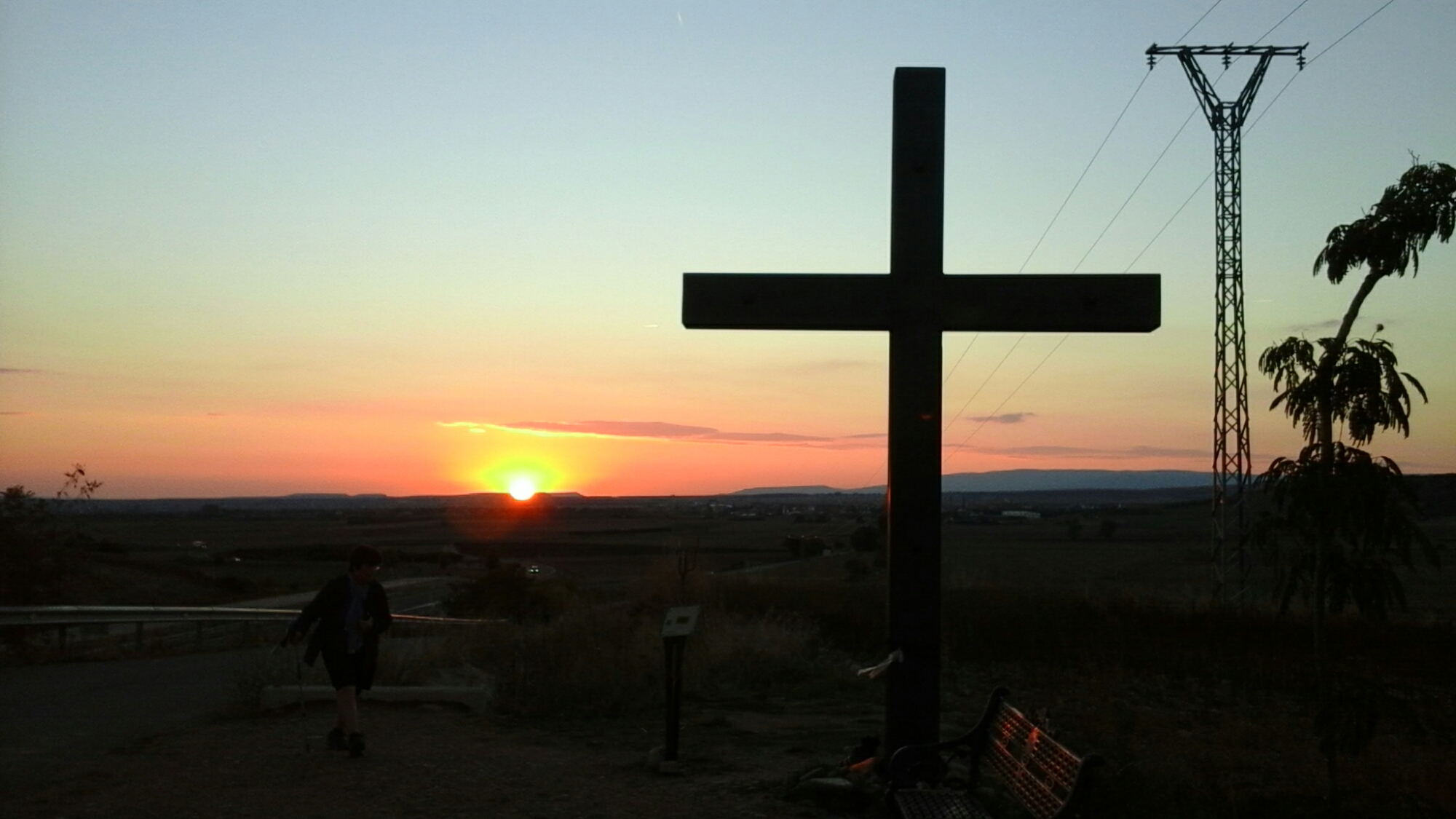 Now where were we? Oh yes, I was telling you about the walk from Najerra to Santo Domingo de la Calzada. Shortly, I came to the town of Ciruena, which is a very strange place. It is a ghostly golf town that has suffered from a housing bubble that boomed and then burst. Rows upon rows of mock timber houses seem to stand empty with their windows appearing like sorrowful eyes looking forlornly out on the passers by. There is certainly no reason to stop there. It’s spooky and reminded me of “League of Gentleman” territory. On the way through, I met Sabrena from the US, who is taking time out from her family responsibilities for a few weeks. She has walked some of the Camino Norte with her hubby, then joined the Camino Frances after her husband flew home to look after their teenage children. She explained that the Camino Norte is ruggedly wild and beautiful, therefore worth doing, but the route is quite remote for someone walking on his or her own. Sabrina had been suffering from the terrible Camino cold, which has been doing the rounds of pilgrims. On the way out of creepy golf town, I chatted briefly with Chris and Charlotte from Ontario, who were staying at the various municipal albergues en route.

By the time we reached Santo Domingo de la Calzada, Laurie was feeling unwell, another victim of the nasty Camino cold. Just inside the town I bumped into a pilgrim called Tias, from Singapore, who told us about the Albergue Abadia Cistercienses. We booked into a cubby hole of a room up on the second floor, which had no door, only a net curtain, separating it from narrow landing and the other dorms. Laurie needed to rest to get rid of the Camino cold. I popped out to explore. When I got back, Laurie was quite poorly. She had decided to take a rest day the following day, which was the right course of action and had booked into a hotel. I encouraged her to consider booking in for this night as well so she could sleep properly, undisturbed. I could tell how our room was, that the night would be a noisy one. I accompanied her to the hotel and on the way we bumped into Ryan, the chap who is collating his dreams for a book. I am convinced Ryan is a natural healer of sorts and speaks into situations through his dreams, but who am I to impose those words upon his path? The Camino will reveal all in good time! We both accompanied Laurie to her room and we experienced instant ‘room envy’, it was lovely and had an ensuite with a bath! Oh to be able to soak tired limbs in a bath…

Ryan went off to explore the town and Laurie and I went for hot chocolate and a pastry. Parting is such sweet sorrow, especially when apple tart is involved! I decided to go on ahead the next day. So our physical journey together along the Camino ended for the time but I was sure we would keep in touch. Laurie had been such a joyful travelling companion, how we had laughed and laughed and the sensitivity and compassion she showed me about the loss of my mum had been a blessing. I am sure meetings and partings of new pilgrim friends is a common occurrence along The Way. It is so easy to meet new people, make friends; you may travel together for a while and then part company, sometimes to meet again further down the way. It was a bittersweet moment. I felt sad to say farewell but happy knowing that Laurie would get the rest she needed to get well and we would both be able to journey ahead doing the ‘work’ each of us had come to do, or rather allow the Camino to do the work in us. One important lesson in all of this is to tune in and really listen to what the body is saying and not push beyond what each of us can manage at the time. Anyway we promised to keep in touch and who knows, we might bump into each other further down the path!

At about the same time, Alan arrived in town. We chatted for a while and then he went to check in at the other place run by Cistercians. I had a short wander around and bumped into Roisin, a lady I met on my first day in St. Jean Pied de Port and Chris and Charlotte, who had taken some lovely pics from the bell tower. There is no way my knees would have made it up those steps at that moment in time. Just thinking about it made me exhausted so I went back to the albergue and to sleep, but not for long. The cubby hole dorm opposite contained a few snorers, the room diagonally opposite had chattering and every now and then someone would pop out and put the hall light on the off. I tried to block some of the light out by covering the net curtain with my travel towel. A peregrina has to be prepared!

Gosh I was tired the next morning but I woke up with everyone else at pilgrim rush hour, because there just isn’t any point in trying to sleep through all the cacophony! There was only one shower and loo on the second floor so I went downstairs to use the ones opposite the boot room. A good move as no-one else was in there, but it is surprising how many pilgrims would rather stand in a long queue for a shower instead of popping down some stairs to find alternatives, another example of funny pilgrim habits.

It was still dark as I picked up the trail out of town. I hoped that Laurie and Alan had enjoyed a better night’s sleep than I had. On the gravel pathway in the early morning light I recognised three figures, Ed the American teacher, who was going to retire next year and Chris and Charlotte from Canada. We walked together for a while and discussed Canadian politics (I recently became interested in this, as my partner Brett is a keen Green Party supporter). Chris and Charlotte had already voted before they came on the Camino, and they told me they were hoping for a change of Government in the forthcoming election in October.

I stopped at the cross on the hill out of town to wait for the sun to come up (see picture) and I felt moved as the sun’s rays spilled over the horizon, casting the cross into a powerful silhouette. I paused for a few moments and said a prayer for mum. I enjoyed the pleasant walk up to Granon, where I enjoyed a coffee stop and then pressed on towards Redecilla del Camino, crossing over the border from Rioja into Castilla y Leon. In Redecilla, I stopped for a while in a peaceful plaza and contemplated the water fountain. 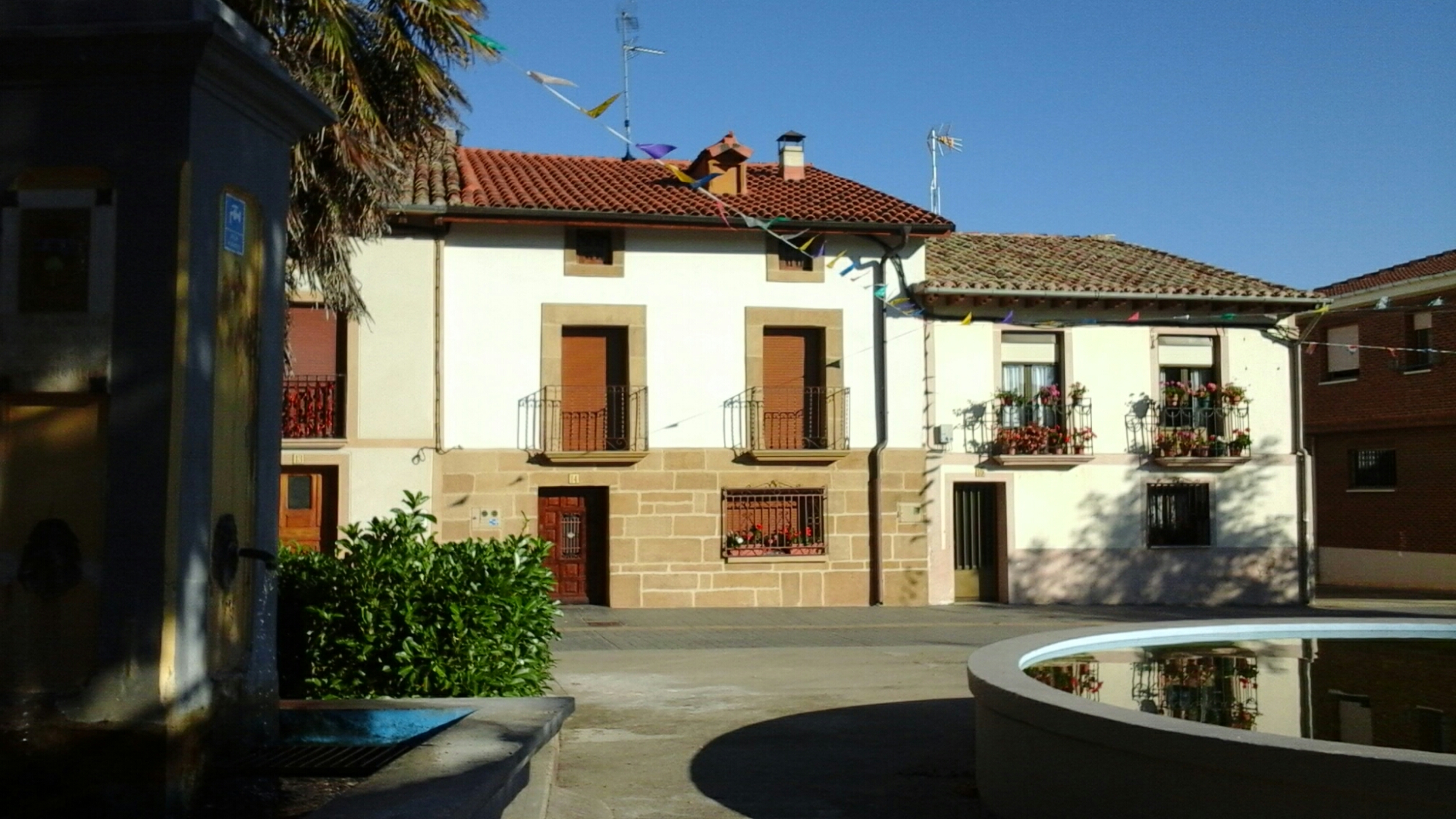 There are many water fountains along the Camino, some are simple, others are more ornate. Pilgrims are well served. These fountains reminded me that water, a very basic necessity and so symbolic of life itself, is for everyone. Anyone who passes by a fountain can taste the water and be refreshed for the journey ahead. I wish this was also true in other parts of the world, where there are ongoing conflicts over scarce resources, including water, or where local people have to walk for hours to access their nearest clean water point, as occurs in many villages in Africa.

I walked on, through the odd looking Castildelgado towards the picturesque village of Viloria de la Rioja, with its charming tudor-style timber framed cottages. I could almost be back in Long Itchington and felt a small pang of homesickness. I stopped for a few moments under a shady tree by the little church. Unfortunately, the little church was not open. A real shame. I have encountered this many time along my journey already and think it a bit perplexing that so many of the churches along the Camino trail are closed when pilgrims pass by.

A short while later I passed through Vilamayor del Rio, went up another hill in the heat of the day and eventually entered the town of Belorado. I immediately heard the familiar song, Desperado, by the Eagles play in my head…I started humming it as I walked along. Soon I walked by the first albergue at the edge of town and decided to give it a miss because it looked super busy. A few minutes later, who should I meet but Tias and his friend Gerard, from Ireland, who recommended I keep walking right into the old part of town and book in to the Pension El Caminante. I followed their recommendation and was pleased to book a single room. Aah I would get a proper nights sleep.

After I settled into my room, I popped out to explore the town, which must have taken all of five minutes and then found a sunny spot outside a cafe in the main square. I hadn’t realised just how hungry I was so I ordered a bocadillo and coffee. The bocadillo was huge! Fortunately, Roisin and Sabrena turned up and joined me at my table. I happily shared my bocadillo with them. We agreed we would meet up for dinner later at Roisin’s albergue, the Cuatro Cantones. In between, I spent some time skyping Brett in Canada and attempting to catch up on my blog posts. Dinner was a fabulous affair in a proper restaurant at the Cuatro Cantones. The pilgrim meal was delicious and served up with care and attention. Roisin, Sabrena and I chatted amiably and I was interested to learn that one of Roisin’s dreams is to run her own albergue and cater for vegetarians and vegans, a niche that does require some filling, especially for organic, raw foodies!

Tired but content, I wandered back to the Pension for a good night’s rest.

Tune in again for another exciting episode.

One thought on “A parting of the ways but not of spirit.”