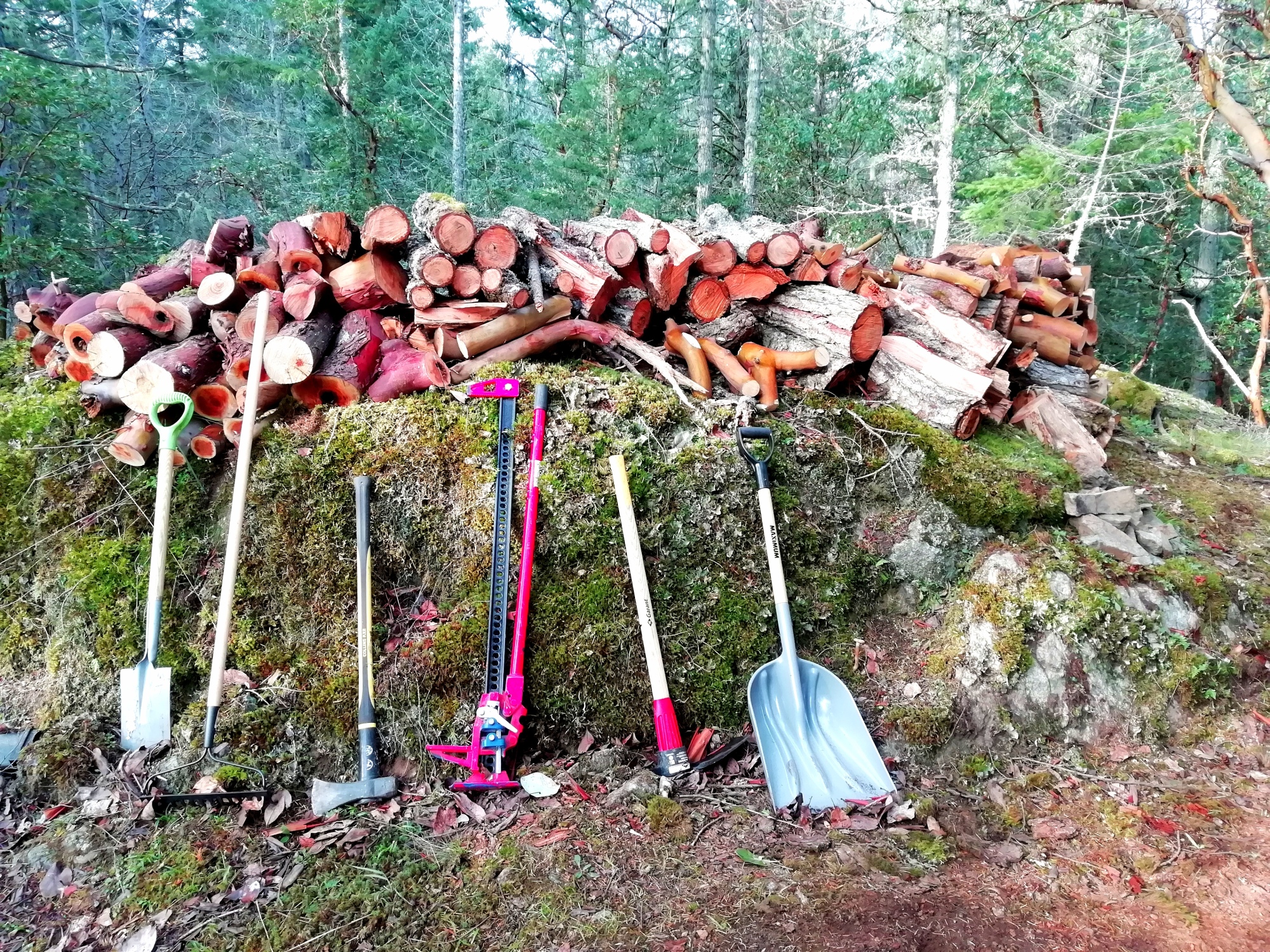 I’m going to tell you a story. Put the kettle on. Now, are you sitting comfortably? Then I shall begin…

Once upon a time, in a land far away, there lived a woodcutter and his wife in a deep, deep, dark forest. Every day you might hear the whirr of a power saw or the chop, chop, chop of axe falling on log, splitting logs for their wood stove. The woodcutter and his wife were very happy in their togetherness, because they were building a ten by ten shed to live in and they were going off grid. They were trying to live in harmony with the forest and all of the animals and the plants that lived therein. They made friends with their neighbours and they would just go about their day to day business building the life of their dreams.

Then one day, after a particularly heavy day of working in the forest the woodcutter’s wife said to her husband “You know, I think we need to go and have a shower.”

The woodcutter said, sniffing under his arms “Fffooorr, yeah, I think you’re right. I know, I have an idea! Let’s go and get some water butts so we can collect rainwater. Then, we can have a shower whenever we want, provided that there’s rain of course.”

The woodcutter’s wife said “Brilliant idea! Let’s go!” And so, off they went into town. Now the town was off island, so they went all the way to Nanaimo and they went to Industrial Plastics. The nice man at Industrial Plastics sold them two very smart, plastic barrels for a very low price indeed and they were blissfully happy about this, because not only were they in the woodcutter’s wife’s favourite colour of blue, but they were very strong, very cheap and they were recycled. So another point on their journey towards becoming green.

Now, the interesting thing about these barrels was they came originally from a very famous coffee company from Seattle, you know the one I mean, the one that likes to sell tepid milk as if it is a real cup of coffee. The same one that, for years didn’t pay their taxes in the UK. But that’s beside the point, I digress. The good thing about these barrels was they were wrested from the evil coffee company, hurray, and the woodcutter and his wife saved them from going into landfill or, even worse, the ocean. Hurray!

So they got them home and they rolled them up the very, very steep hill to their little shed and they put them out there connected them to the eaves trough and waited for rain, which soon came…pitter, pat, pitter, pat, because it was autumn. Now, the only downside to these magnificent water barrels was that they used to contain nut oil, hazelnut oil to be absolutely precise. But the woodcutter and his wife didn’t mind because they liked the smell of hazelnuts, so they didn’t do anything about it. So they collected rain and they had a shower, daily, and they did their washing up from the rainwater from the water barrels and they went on happily in their togetherness like this for some time.

All of a sudden, the wood fell silent. No more could you hear the whirring of the power saw. No more could you hear the chop, chop, chop of axe falling on log. Their neighbour was astonished. He thought, have they done away? So he decided to investigate and he walked up the hill. It was a very steep hill but he got there. He could not see the woodcutter and his wife in the forest at all. So he knocked on the door. There was no answer. He opened the door and went into their shed and couldn’t see them anywhere. He went into the garden and there, in their place, what he found amazed him. For there was a huge scurry of squirrels, yep, lying on their backs in the sunshine, their little paws holding on to their very large, round tummies and they just lay there licking their lips, hmmm, hmmm, hmmm.

One thought on “The Woodcutter and His Wife – a short story”